Later today or tomorrow I’ll post some of the cards. I’m having great fun with this set. But, for the moment… 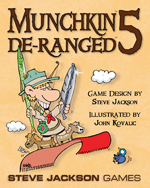 Munchkin 5 – De-Ranged brings you more of the twisted humor of Steve Jackson and
John Kovalic in a 112-card supplement for Munchkin!

• Treasure! Track down the Philosopher’s Scone, put Racing Stripes on your
Steed, and fill your Canteen of Spleen with Carbonated Holy Water!

• Monsters! Beware the Telemarketer, the Poultrygeist, and the Undead Clowns.

• And more monsters: imports! That’s right, unique monsters
created by the European Munchkin publishers, available for the
first time in English. Quake in fear at the Brothers Grimm and the Snerks! Or
just kill them and take their stuff. Your choice.

Munchkin 5 – De-Ranged. All the munchkin-ism of a
prestige class, with none of that annoying roleplaying stuff.