About to collapse. But must post some pics from a camera that was dropped twice, but still managed to function. I played so bloody many games that I didn’t take more than a handful of snapshots this year. Here are a mere few highlights:

Army of Dorkness and Dorkstock Goddess Lori Curley, with an amazing gift made by Liz (a great surprise – I wasn’t sure she’d be able to make it from Canada. She did, PLUS she brought me a copy of Munchkin en Francais! Merci beaucoups!)

Cutting the Igor Bars for the Igor Bar contest took muscle. They were heaping mounds off goodness, this year. And those are Muskrat Cakes in the bottom left of the screen. Don’t ask. 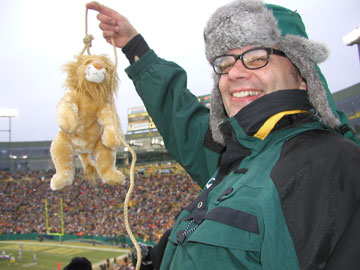 Judging the Igor Bar contest. Insulin was available upon request.

My great pal Marty, contemplates a winning move at 10 Days in Europe. Although he didn’t actually win, nor did I. Picture taken from this loser’s vantage point.

Liz, winner of the Blink Bounty Button tournament, which was a rousing success.

Just three wonderful reasons to come to Dorkstock. Never mind the goon in the middle. Plus, said goon has now shaved.

Non-photographed highlights include, among others which I apologize for not mentioning:

* Folks travelling from great distances to attend. Including Fuzzface, Doug and more.

* Many, many games of Cineplexity played, including an already infamous “Shirts vs. Skins” games that WOULD be NSFW, had I actually snapped pictures of it.

* Meeting up with Jamie and Renae Chambers, and getting a few games in.

* Meeting up with MANY friends.

* Having to miss the Dorkstock Party (I was exhausted, and had to drive back to Madison), featuring both the amazing Luke Ski, PLUS a bridal party that crashed the party. HUGE fun, I am told, ensued. Along with security being called (by us).

* Not having enough time to make it around the dealer’s area.

* Not having enough time to make it around the silent auction. There were MANY 15 mm WWII painted minis that would have put a serious dent in my wallet had I been able to stake them out.

Work is being begun for next year’s Dorkstock, which I hope will be even larger and grander than ever, with some seriously special guests and even getting (Gasp! Shock!) ads and info out well in advance. I really can’t thank folks enough for making this such a grand weekend. In particular, Lori and Frances were, as usual, amazing.

Also, HUGE thanks to Out of the Box, Steve Jackson Games and Fantasy Flight Games for providing the coolest assortment of prizes we’ve ever had.

I’m sure many more memories will pop into my befuddled mind in the next few days. But for now…I sleep!

BTW, I’ve a ton of work to do and a wedding to attend next week. So I may go underground for a while…