If you saw yesterday’s cartoon, you’ll have seen that a Dork Tower reader (Robyn) in Idaho Falls, Idaho, proposed to her boyfriend (Jared) in the comic strip.

A few months ago, Robyn e-mailed me and asked me if she could use Dork Tower as the vehicle for her proposal. Since I also proposed to my wife, the Lovely and Talented Judith, in my old comic strip Wild Life (read all about it at http://www.gamespy.com/comics/dorktower/page.asp?id=11), who was I say no?

So yesterday’s cartoon ran, the day Robyn and Jared were about to take off for a Canadian vacation.

Robyn was excited with how well the comic turned out. And then I heard…nothing.

My assumption is Jared said “yes,” and that they went off on their Canadian vacation (if he said :no,” somehow I’ve got the feeling that the trip would have been off.

But we’ll wait. And see. And keep our fingers crossed. Won’t we?

In the MEANTIME, I got a note from ANOTHER reader:

Comments: John,
I hope you don’t mind, but I had to “borrow” your strip as displayed on today, 7/14. A few quick strokes using MS Paint to edit the names and off went my e-mail to Trish. Whaddaya know? She said “yes”.

Thanks for a couple of great years of great humor.

So how about THAT? *Two* proposals from *one* comic strip! And we’re batting at least .500! I’m guessing we’ll be raising that to 1.00 as soon as we hear back from Robyn! (Don’t keep us in suspense here, Robyn!)

Unless someone can come up with a better name, I’m thinking of calling this the Dork and Pleasant Land Tour 2003. A tour t-shirt is also in the works. So if you DO come up with a killer name for the British tour, e-mail it to me at john@kovalic.com and I use it, let’s say you get a free tour t-shirt…deal?

This week I’ll be at San Diego ComiCon Thursday, Friday and Saturday, with signings from noon to 1:30 pm each day. Just search out the Adventure Retail/Atlas Games/Steve Jackson Games/Dork Storm, Press mega-booth!

Wow. In my updated Tour Schedule Thursday I forgot to mention a certain little con I’ll be going to in the fall:

I’ll save info on that for a separate Ramblings, but suffice to say last year’s con was amazing fun!

Peace. Love. Dorks. Be there.

Dork Tower 23 should be in stores this week or next! Hey, nonny-nonny!

Why two so close together? Well, I’d like to say it’s because they form a two-part story (which they do). But it’s mostly just me, trying to get the comic book back on schedule after an insane Winter and Spring workload.

It’s nearly there, though. And Dork Tower 25 will be out VERY soon after. This is gonna be a HUGE, very special issue. Stay tuned.

Did I mention “Huzzah”? 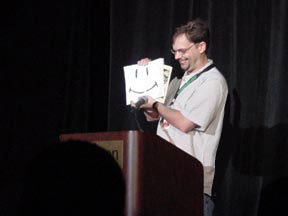 Last week, I was lucky enough to be a Guest of Honor at Convergence (http://www.convergence-con.org), in Minneapolis. 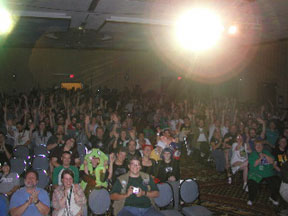 In all honesty, I was dreading it a wee bit. I was exhausted from Origins, and I was fantasizing about how a weekend at home (what a concept) in the hammock (aaaaah) would feel. I go through stage fright before appearances, and I don’t do well around people I don’t really know.

However, this was one VERY well run, fun con. Folks there are incredibly nice to begin with, and wow, did people go out of their way to make sure I had a good time.

And I had an amazing time.

If you’re interested in ANY aspect of fandom, leave within a few hours of the cities, and you haven’t hit Convergence yet, you really must. It’s both relaxing and wild, and it couldn’t be run by a better group of folks. 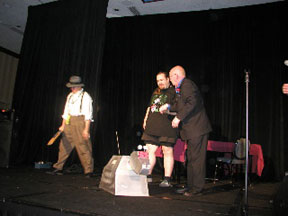 Within minutes of our arrival (the lovely and talented Judith came along), another guest (irrepressible British actor Michael Sheard, above, about to whack K-9 during the closing ceremonies) was foisting whiskey on us. It was a good sign. 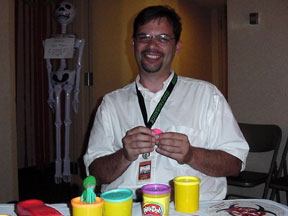 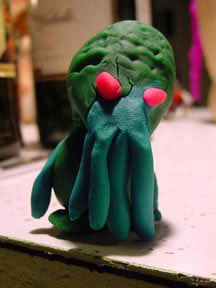 Convergence takes up most of the Bloomington Radisson hotel, and ALL of its rooms surrounding the indoor swimming pool! These are then converted into theme party rooms — probably about 40 or more in all, I’d guess, meaning that the craziness that goes on Friday and Saturday nights really does rival Bourbon St. as far as sheer spectacle goes. (HOUSE OF TOAST! CTHULHU COFFEE! HOUSE OF TOAST! CTHULHU COFFEE!)

This is a convention where almost 2,000 people showed up, so there was plenty of programming to go around. Between the various film rooms, seminars, dealer tables and art displays, there were always two or three events at any one time that you’d have LOVED to have seen, and another half-dozen or so vying for your attention that weren’t too shabby either. 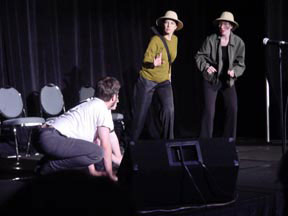 Special mention has to go out to a really hilarious comedy troupe that performed at the closing ceremonies: Soylent Theater (above), a sketch comedy troupe known for its “twisted science fiction geek comedy.” I was fortunate to be on a panel with them the day after I watched them perform for the first time – and it was great geek humor at its absolute finest. I can’t find a web page for the group, but in the Real World they seem to go by the name Look Ma No Pants, and are related to The Scrimshaw Brothers). 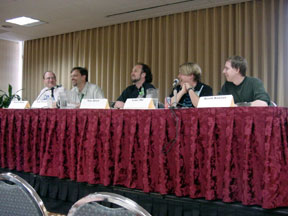 The Great Luke Skiwas also on the panel, and the audience was packed. I mean, it was just a huge, raucous, hilarious blast, and may have been the best panel I’ve ever had the privilege of being on. The Dork Tower panel I was on was also full — standing room only, in fact. And to top everything off, the hour-long signing I was scheduled to do lasted two full hours, as the line kept going, and going…(below) 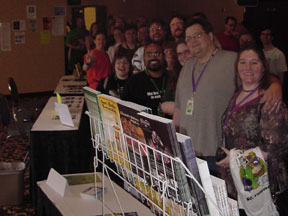 Other highlights were lunch with John and Michelle Nephew from Atlas Games Friday, playing guitar really badly with Bob Brynaldson from the Source, andrunning into a whole bunch of friends I just didn;t expect to, like the guys from Fantasy Flight Games, or others who made the drive up from Madison.

I had to miss the Dead Dog party on Sunday, which was a shame, since the Convergence gang really are folks you wanna hang out with. I haven’t been able to make it to previous shows, as its dates have always conflicted with those of Origins. But honestly, if they conflict again in the future, it’ll be a REALLY hard decision for me. I have to make it back to Convergence at some point!

Thanks to EVERYONE who made it such a great time for Judith and me!