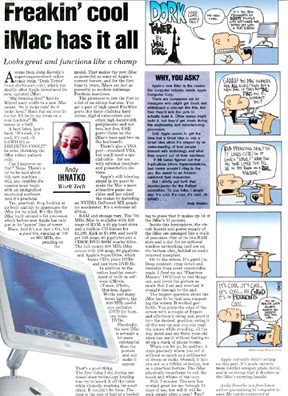 I love – LOVE – the windy city, so it was a particular thrill for me to have some readers e-mail this morning and let me know that the Chicago Sun-Times ran a Dork Tower comic along with a tech column today.

(Click here for the cartoon, as it originally ran at DorkTower.com.)

I still haven’t found a home for the Dork Tower Tech cartoons, now that Interactive Week is no longer with us. With luck, something will pop up soon, because I really loved doing the series for that audience. In the meantime, I’ll try and fit as many of them as I can in the dorktower.com run. But it was nice to see a ‘tech toon actually in print again.

MANY thanks to Sun-Times writer Andy Ihnatko, for the very kind words he had to say about Dork Tower in his column.

Thanks, too, to Chicago reader Sonia Olsson, for scanning the page and sending it along. You rock, Sonia!

And if anybody reading this happens to be from Apple, you know the address to pop a complimentary iMac to. Grin.

In other news, Dork Tower #17 should go off to press this week, while Dork Tower #16 should start getting in stores soon.

On the language front, I’m pleased to say that a deal for Dork Tower comic books to be printed in French, by a Parisian publisher, is very close. And not only that, but the dorktower.com website looks like it will soon be mirrored in French, German and Spanish.

Lastly, Polish translations, are in the works. I’m still hoping for Czech, for my own reasons, and Japanese…

But I’m psyched by this all. All together now: HUZZAH!