First
off, I need to thank a few people for some wonderful
gifts I’ve received recently. It’s always great to get neat
stuff in the mail, and Dork Tower readers are often generous
beyond words. 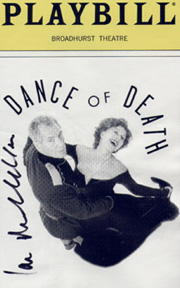 Kit
Lo, a reader in New York, actually sent along (gasp)
an Ian McKellan autographed Playbill! This was
following the recent Lord
of the Rings strips that ran. Talk about being
blown away. I’m just looking for a nice Lord of the Rings
Gandalf publicity shot before I frame this.

John
“Fuzzface” McMahon sent a Danger Girl hardcover
collection…with every disparaging comment that Matt
ever made about Danger Chix inscribed in it. This was
just too funny for words, and will be cherished.

Barbara
Robson from Australia didn’t ONLY send Cheese Twisties
(the greatest cheese-flavored junk food in the world,
IMHO), but also Chicken Twisties, Toffee Twisties (weird
but yummy) AND Tim-Tams, a real Down Under treat. I now
need to work out daily because of this care package.

Harvey
Mills of London and Jan Hendricks from the
Netherlands didn’t just bring me loot last Dragonmeet:
they dropped off enough sustenance to keep a small army
on its feet. Harvey gave me a MASSIVE tin of Cadbury’s
Miniature Heroes (Judith and I are STILL working our way
through it), while Jan dragged an entire six-pack of Gulden
Draak across the North Sea for me! Gulden Draak is my
second-favorite beer in the whole world, and the first
(Westveleteren 12) is near-impossible to get unless you’re
a Belgian monk. 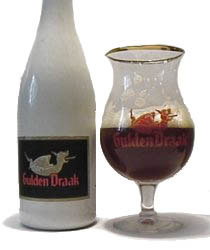 Thanks
to everyone who’s sent things. It’s a definite highlight
of a job that’s pretty cool to begin with.

Dork
Tower #16 went to press a week late, due to some last-minute
tinkering with the main story. It shouldn’t affect the release
of Dork Tower #17 or 18, which are both well underway. Livin’
La Vida Dorka seems to be in some stores now.

A few
people have asked whether there’s any overlap in the strips
collected in Livin La’ Vida Dorka and those in Dork Covenant
and Dork Shadows. The answer is: very little. Lass
than half a dozen strips in the hundreds collected, I believe. 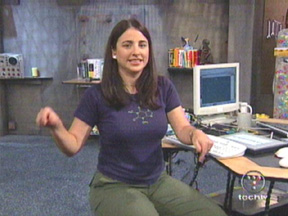 “So
just who IS Megan Morrone?”,
a few readers from outside the US have been asking.
Basically, she’s a cool, down-to-earth presenter and ‘net
expert on the Tech
TV show “The
Screen Savers.”

It was
when a member of the Dork Tower
Mailing List began raving about her, though, that
I thought it’d be fun if Carson had a crush on her. Unlike
Igor’s dream women (Apollo Smile, Lara Croft
and Daphne from Scooby Doo), Megan Morrone is about
as real as you can get. So it amused me greatly when I discovered
there was actually a fansite
or two
or three
dedicated to her.

(The
first site is a VERY Carson creation, btw — I particularly
like the dolphins).

And
hence this little Valentine’s Day series was born. 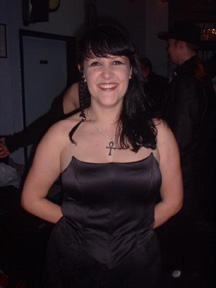 Lastly,
Ozzy Beck in Germany sent me this picture of a Gilly
lookalike.

Among
other events at Origins, by the way, will be a Dork Tower
lookalike contest. Details haven’t been nailed down, but
I think there will be prizes for best Carson, best Igor
and best Matt and Gilly (as a pair). Huzzah!

Guest
speakers this year are me, Lester Smith, and Matt Forbeck.
We will be joined by several members of the Beloit College
Faculty in a panel discussion Friday evening on social and
political issues in Star Trek.

Some
folks on the Dork Tower Mailing List are thinking about
organizing a Dorky get-together, either in Beloit or Rockford
(Beef-A-Roo! Beef-A-Roo!), afterwards. Stay tuned for details.