All Psyched
Up and Nowhere to Go…

OK, *this* is
what I like about the creative life.

Dork Tower
#16 is almost ready to go to press. Greg Hyland colored the cover,
and it’s incredible. The Lethargic
Lad backup and the Artesia
backup are simply stunning.

Steve
Jackson wrote a Chez
Dork article, and the main DT story is a hoot (for me, at
least). I’m not tellin’ ANYTHING about it, save for it’s Kayleigh
vs. Igor all the way. AND there may be a neat freebie from MicroTactix
Games, if there’s enough room. All in all, things are just
rolling and I couldn’t be more upbeat about it.

For a while, I’m
going to concentrate on shorter stories and one-pagers. The three-part
Matt/Gilly/Kayleigh trilogy was great, but I think it’ll be the end
of the year before I feel like doing some more full-book or multi-book
storylines. Not that the story arcs won’t continue. They’ll just be
packaged a little differently. And at the moment, I’m loving it!

Other good news:
Livin’ La Vida Dorka (the Dork Tower comic strip collection) gets
back from press in a couple of weeks. Orders are up 80% over
the first two Dork Tower trade paperbacks, which is unbelievable!

More keen news:
Scott Kurtz‘s cover for
Dork Tower #17 (February) rocks. In fact, this and a first mockup
are both so good that I may do an alternate cover for the first time
ever (it won’t be collectible. A strict 50/50 ratio just ’cause I
wanna have FUN, and frankly, I love both pieces!) And Scott’s also
written the intro to Livin’ La Vida Dorka, which is humbling
indeed!

And by the way:
once you find out the REAL title of Dork Tower #17 (it won’t be revealed
until Dork Tower #16 comes out — the blurb in PREVIEWS was pure camouflage),
I think you’ll bust a gut. 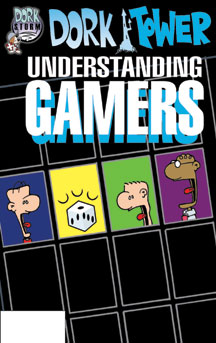 After
that, of course, it’s on to Dork Tower #18 (“Understanding
Gamers”) in March. And I think I’ve finally come up with a title
for the next Dork Tower collection: Hearts of Dorkness (May/June
2002).

As you might be
able to tell, I’m all cranked up on some weird amazing mojo(it’s called
loving your work), and Bob Mould
is playing in the background. The ideas are coming fast and furious
and I can’t draw quick enough.

And I’m madly
in love with my wife.

And
Aaron Williams just got engaged.

And the sun is
out.

THIS is the life!