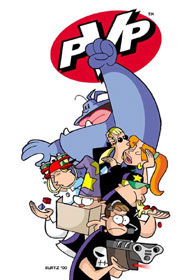 I
Want My PvP!

My compadre, cartooning
bud and partner in Dork Storm crime, Scott Kurtz, is in infosphere
limbo. His website, PvPonline.com, has been down for a week. Which
has meant no PvP. Which has meant we’re all suffering for our daily
fix.

L est
people panic, have no fear. PvP will be back as soon as Scott gets
some annoying ISP problems sorted out.

Here’s what’s
going on, straight from The Kurtz’s mouth:

Nothing ever
breaks down when it’s convenient. PvP has been hosted by STOMPED.COM
for the last year. The guys are STOMPED are friends of mine and they
have been so great to give the PvP site a home. STOMPED is growingin
new directions and they are putting more focus and energy into their
LAN center than their web presence. Because of this, PvP is moving
to a new webserver.

So as we prepare
to make transitions and changes with the hopes of everything being
seamless for the casual PvP reader, life comes in and shakes things
up as it always does.

One week before
I flip the switch and point www.pvponline.com to the new server, a
hard drive on the Stomped webserver blinks out. Worse than that, it
blinks out the day before Christmas eve. Needless to say, it’ll be
Wednesday before anyone is even going to be contacted to look into
fixing things.

So here’s the
situation. PvPonline.com is down this Christmas. In the meantime,
some people will be posting the daily strips for me so you can get
you fix and know I’m not cheating and taking time off from my entertainment
duties. Hopefully, I can get the DNS changes made so that you can
start seeing the site again before too long. We shouldn’t be down
for more than a week. Let’s hope.

In the meantime,
have a wonderful Christmas. Spend time with your family and don’t
worry about cartoons for a week. If you need to please email me at
my new address: kurtz@speakeasy.net.
My pvponline.com mail won’t work until things are restored to their
previous glory.

Thanks and
see you next year.