First off, the bad news.
Monday morning I got a call from my editor at Interactive
Week, telling me that, due to the prolonged slump in advertising,
the magazine was folding. Or rather, parts of it were being folded
into its Ziff-Davis sister publication, E-Week.

This last Monday’s issue
was its last. This came as a shock to many, and although I’m dreadfully
sorry that the magazine is closing its doors, I’m happy that I got
a chance to work with all the great, talented people on the staff.
It was one heck of a team.

The full news story can be found here. (Note there are some
mixed feelings associated with this piece. While it’s nice to work
at a magazine important enough to be mentioned in the Wall Street
Journal when it folds, it has — ahem — STILL FOLDED, which doesn’t
help the staff much).

Now, whether or not Dork
Tower gets picked up by E-Week is anybody’s guess. I suppose
there’s a chance that it could, but I don’t know how large or how
small that chance might be. Some IW folks described Dork Tower as
a popular feature of the magazine, which is flattering indeed, so
I’m keeping my fingers crossed.

But whatever happens, I’ll
keep doing Tech cartoons along with the gaming ones. I’m really proud
of the work I did for Interactive Week. I think my editor and the
IW team brought out the best in me.

I also
enjoyed writing strips that focused on Ken a little bit more. At
the start of the Interactive Week run a year ago (well. 45 weeks,
but who’s counting?) he was the least defined of Dork Tower’s central
characters. Now I feel like he’s really come into his own.

The bottom line is, there’s
now an opening in my schedule. If anybody has a favorite magazine
they’d like to see Dork Tower run in, NOW is the time to write to
your editor, and have them check
out the strip. 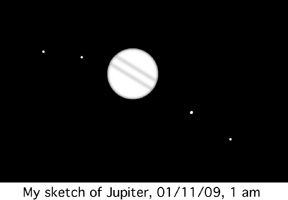 Now,
onto the good news.

The Autumn nights have
been beautiful here in Wisconsin, and I’ve been able to drag my Celestron
Nexstar 8 telescope out nearly every night this week.

Monday I indulged in a
little blinding Lunar astronomy. And when I say “blinding,” anybody
who’s ever looked at the moon through an 8″ telescope that DIDN’T
have a lunar filter on will know what I mean. However, my ‘scope is
new, and I’d never really seen the moon through anything other than
a good pair of binoculars. I spent hours just staring at craters.
It was stunning, but I’m DEFINITELY picking up a lunar filter.

Also, Saturn was magnificent,
even with significant light pollution from the nearby moon. Even through
a good pair of binoculars, the rings are visible. Through a telescope,
they’re breathtaking.

Midweek, the Northern Lights
were leaping across the southern Wisconsin sky like slow-motion waves
on the shore. I’ve never seen the Lights as red as they were Tuesday:
it was like a sunset at 11 pm. Last year, I caught them around Christmastime,
up North, as Judith and I were driving up to visit her family in Ellesworth.
If there are any Radiohead fans reading this, trust me: the BEST time
to listen to “Kid A” is with the Northern lights dancing around the
sky in front of you, on a lonely, chill winter night.

Yesterday, I got some potentially
good news via e-mail, and had a hard time sleeping. So I went out
around 1 am, and took in Jupiter and the Orion Nebula. Both were profoundly
moving. All four of Jupiter’s major moons could be clearly seen, as
could two of its cloud belts (see the sketch I did).

This was also the first
time I’ve ever seen the Orion Nebula through a telescope, and I was
prepared to be disappointed. I wasn’t.

As I was on the roof (it’s
a flat roof, don’t worry), a couple of deer wandered through the yard.
They only ran when the telescope’s motor started up as I switched
sights from the nebula to some star clusters. But for a while, I just
watched the deer in the dim light of the waning moon on the horizon.

The only audible sound
was the crackling leaves under their hooves. The air was crisp, and
even though I was out there with only a coat over my bathrobe and
pyjamas, between the heavens and the earth, I couldn’t think of anywhere
I’d rather have been at that moment.