You may not know this, but I once thought of myself as lazy.

Though Dork Tower has been coming out in regular bimonthly intervals recently, and Dork Tower #15 should be back from the press in a few weeks, getting caught up with the backlog is still a way off.

So we’ve come up with a solution. Dork Towers #16, 17 and 18 will all be resolicited through Diamond. In December, Dork Tower #16 will be solicited for February (although as soon as orders come in in January, it’ll be ready to ship). This means it’ll still be just about two months behind Dork Tower #15, and all will be right with the world. 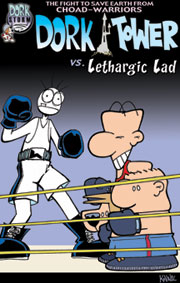 In fact, now that I’ve blocked out time and cut a bunch of conventions, Dork Tower # 17 is already nearly done, and # 18 is halfway done. They should be out hot on the heels of #16. By resoliciting them for early 2002, it gets the comic book back on a definite publication schedule with real deadlines and actual method behind the madness. And there’s gonna be some great stuff in the next few comics.

Why do I feel the need to refocus on and prioritize the comic books anyway? Well. I’ve been going through my last year’s notes. In 2001, I worked on the following books that were released (or soon will be):

However, I also did the graphics and illustrations for ALL of the following games (and some development and LOTS of writing for more than a few of them):

Some list, huh? And don’t forget the weekly Dork Tower strips on the web, and in Interactive Week. Plus monthly work for Dragon, Star Wars Insider, Scrye, Pyramid (though I’m taking a break there), etc.

On top of this, I made it to a dozen — yes, a DOZEN — conventions in 2001. (It’s VERY hard to say no when somebody wants you to be a guest of honor), and of course the four KILLER trade shows over the summer (Origins, San Diego, GenCon, WizardWorld) were just brutal, schedule-wise).

Oh, yes. And managing this company.

And did you read my October 2 column about spending more time with family and friends?

Yes, I used to think of myself as lazy. But going over this list really makes me realize how good it feels to have dropped outside game illustration (there were HUNDREDS of cards for the Munchkin and Chez Geek projects alone), and most of next year’s conventions.

Liz Fulda now filters ALL requests for my time, and she’s a harsh mistress. As I said, I’ve carved out a nice block of months over the winter and spring. The comics are coming, and they’re gonna rock!