There are a couple of items I’ve posted that I thought folks might like to know about. But there are a TON of neat items being auctioned by some really great companies. Go on. Visit. Look around.

Spend some money. It all goes to charity anyway. 🙂

The general site is at http://www.gidfa.org/index.php

This character, based on a photograph you supply, will make an appearance in an upcoming Dork Tower. Yes, that’s right. YOU will appear beside one or more of the Dork Tower regulars (Carson, Igor, Matt, Ken and Gilly the Perky Goth)! Huzzah!

The winner of this package ALSO will receive the original artwork from the comic strip they make an appearance in, as well as a COMPLETE set of Dork Tower comic books and trade paperbacks, signed and sketched in by John Kovalic, including all sold-out issues of the comic book.

(Please note: by bidding on this item, you agree to allow John Kovalic to reproduce the cartoon with your character in it in any future Dork Tower comic books, collections or magazines running Dork Tower).

Chez Geek, Dork Tower, Munchkin and Chez Dork artist John Kovalic will draw a character based on a photograph you supply, on a blank Chez Geek card. Steve Jackson will come up with rules and text for the card.

The photo may be of you or a friend, but the one-of-a-kind card is yours to do with as you wish! Join the fun of Chez Geek by becoming an OFFICIAL PART OF THE GAME with a card and card rules of your very own! Needless to say, this is a unique item, and is sure to be hotly contested.

(PS. Dork Tower #15 is almost ready to go to press! So celebrate and buy something. Grin.)

Just a quick update or two:

1) Dork Tower #15 is coming along swimmingly, and should be at press soon. As soon as I get a chance, I’ll post the cover.

2) I’m getting ready for Rock Con this Saturday and Sunday. It’s one of only two conventions I’ll be doing for a few months, as I’ve noted before. It’ll ALSO be the first time I’ve played any games in a while. The friendly folks at Pegasus Games will be manning the Dork Tower booth, so please thank them kindly for helping to preserve my sanity.

3) And finally, those of you who are members of the Dork Tower Mailing List will know Frances Rodgers, one of the perkiest people there (and also a bona-fide Major General in the Army of Dorkness).

Well, here are some photos of her in her Gilly the Perky Goth costume. Anybody recognize the pose in the first shot? 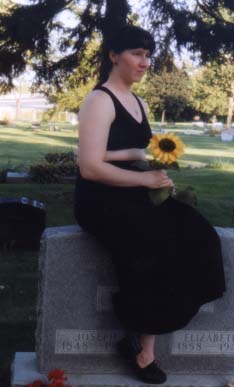 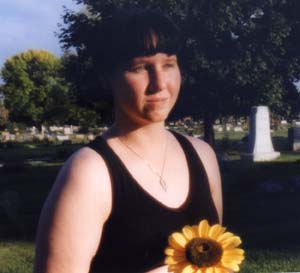 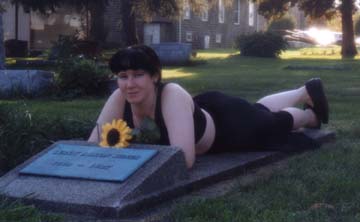 Lastly, here’s one more photo, from a Brazilian convention in São Paulo last week. If you look closely you’ll notice what the football team is holding…the Portuguese version of PokeTHULHU. Yes, weirdness apparently translates well. Many thanks to Devir’s Silvio Compagnoni for taking the photo. 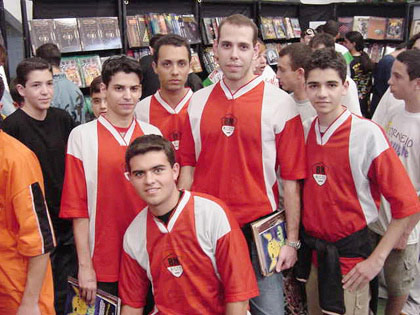 My column on leaving the convention circuit generated more replies than anything I’ve ever written here. I’ve literally been swamped with correspondence, and I’ve still got dozens of e-mails to respond to.

Ninety-nine percent have been overwhelmingly supportive, for which I’d like to thank everyone deeply. I’m now at peace with the decision, and feel good about it.

However, there was one reply that I wanted to share with everyone. In these times, I don’t think much more need be said than this:

Just wanted to express my agreement with your decision and encourage you to do what needs to be done…getting back to basics. September 11th changed everyone. Sadly, it took over 6,000 lives to change many people for the better. People are more courteous to each other and more patriotic to mention a few ways things have changed.

I would like to bring one thing to your attention. You mentioned last year you spent about 90 days away from your wife. I’d like to mention (and I know you have probably thought of this already) the tens of thousands of men and women who spend many months away from their wives, husbands, and kids every year all in the service of this great nation in an effort to defend it and possibly assist other nations through various problems. They often miss their own children’s births, first steps, first words, birthdays, Christmas, etc. They miss ballgames, plays, recitals. All in a desire to ensure the USA remains a free nation. Often times they are only remembered during national emergencies. Perhaps it’s better that way. Perhaps it’s better that the nation’s military is forgotten during peacetime. Not like in many nations where the military plays a prominent role in everyday lives. This way we always remember that our founding fathers desired this nation to remain a nation ruled by civilians – not military.

John, I felt this needed to be written. Not because you are guilty of forgetting the military, but because you mentioned the 90 days you were without your wife. Luckily, I’ve been assigned to a unit for the last three years that doesn’t deploy and I’ve seen my kids grow. But there have been years when I’ve been deployed over half the year or more. I have friends who are away from home more then they are at home.

On a lighter note – I really enjoy your comicbook. Dork Tower and Nodwick are really my two favorite ones!!

As you write your comic please remember the many thousands of young men and women (many of whom buy your comicbooks) who are stationed throughout the world. Especially remember those who are now stationed around Afghanistan, are in harm’s way and stand the watch so we can attempt to resume a “normal” life style. John. Remember those men and women who are without their loved ones during the coming months.

I don’t think it can be said too often: the admiration is mine, for all who put aside their personal lives and make the sacrifices necessary to serve the United States, and for those in the other Western democracies doing the same.

For years I made a living as an editorial cartoonist, criticizing the government and politicians of all stripes and ideologies. I may do so again in the future. Politically, I’m left of center, but I’m allowed to hold my own beliefs and make fun of those in power because of the freedoms we enjoy. And we enjoy these in large part because some people have fought and died for them.

I’m not good at the rah-rah kind of patriotism that others are. Instead, I’ve always held a quiet sense of pride in this country, and in Britain, the nation of my birth. I’m proud of the achievements and the potential of the United States. It’s not perfect, and we’ve made mistakes, both here and overseas. Sometimes our nation has steered tragically off-course, but we can — and do — work to change it, and to make it better.

That’s the great thing about our republic, warts and all. For all its failings, it’s like this great slate that CAN be refined and revised, that we CAN add to, that CAN truly stand for the notion that all people are created equal, and have the right to life and liberty.

And that’s thanks in no small part to people like Eric.