"Secret mission? What plans? What are you talking about?" 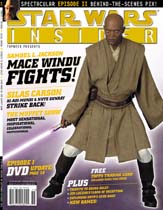 I’ve just hadmy first cartoons accepted to StarWars Insider, and it looks like it may be the start of a regulargig. This is important for a couple of reasons.

1) This isSTAR WARS we’re talking about here, and

Star Wars Insideris a huge magazine, with hundreds of thousands of readers. I’ll bedoing a combination of comic strips and comic panels ("The UnspeakableOaf," above) for them. I won’t be doing Dork Tower, but comingup with a new strip, tentatively titled "Bob of Tatooine."(I had a marvelous lunch at the San Diego ComiCon talking with thebrilliant Mike Stackpoleabout working for Lucasfilm. And I must admit, it’s been a blast sofar).

Look for my workto start in Star Wars Insider in a couple of months. I’ll besure to mention it here when it starts.

Newbies,a comic strip I created with my good friend LizRathke, looks like it will finally get a real home. ConnectedHome Magazine, published by Penton publishing (who also do Windows2000 magazine) launches in January. And Newbies will be there!

As I said lasttime, some days, this job is WAY too much fun