Yes…it’s me, at last weekend’s Origins convention, in the unfamiliar position of posing with an award I’ve won.

We took the Origins Award for “Best Game-Related Short Fiction with “Matt and Gilly’s Big Date” from Dork Tower #11 and now collected in the brand-spanking new DORK SHADOWS: The Collected Dork Tower Vol. II. Or you can just read the story HERE.

It can be found in its entirety here. Thank you and a hearty “HUZZAH!” to everyone who voted! As people who witnessed my acceptance speech may have noticed, this really meant a lot to me.

By the way…the display pedestal was swiped by Aaron Williams. It originally held a plate of fruit at a reception that followed the awards. And the look on my face? why, it can only say "Aaron, I’m gonna kill you…"

PYRAMID MAGAZINE ONLINE, which I’m lucky enough to be a contributor to, and which Dork Tower features prominently in, also took the Origins Award for "Best Gaming Publication"

LOTS of cool stuff went down, and I met a lot of folks from the Dork Tower Mailing List and the Dork Tower Yahoo Club. In fact, if you want to chat about the Origins Award, why not go there now? It’s a cool site and you can pick up lots of Dork Tower info there. 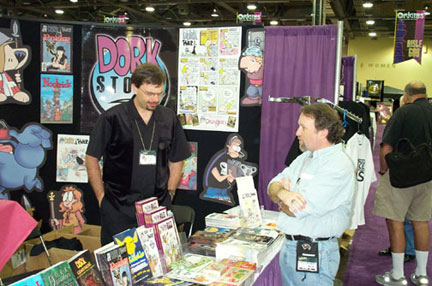 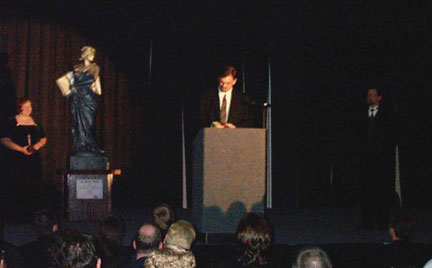 Me, realizing why smart people PREPARE acceptance speeches.John Pythyon (right) was the presenter for this part of the awards ceremony. 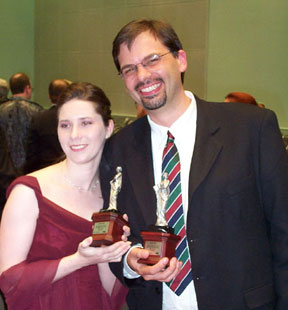 The aftermath of the awards: Schmoozing with the always lovely Michelle A. Brown Nephew of Atlas Games. Note Ken Hite in the background, who seems to be omnipresent. 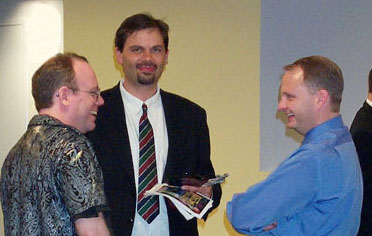 Pyramid’s own loveable libertarian of high weirdness Ken Hite and Pinnacle’s Shane Hensley, guru behind Deadlands, one of the coolest games out there.

After averaging three hours of sleep a night over the course of the convention, I need to rest a bit right now. Forgive me if updates to the website are sporadic at the moment…but more Origins tales and more photos will follow.

Don’t forget, by the way, Aaron Williams’ classic comic FLOYD is now being archived at http://www.fiction-fantasy.net/floyd_001.php . Check it out, and see what Aaron was up to BEFORE Nodwick became an international mega-hit!