I wasn’t going to announce this, because for a while it didn’t look like it was going to happen. However…

I just received an e-mail from Jim Pinto, Art Director for AEG. The Iron Shadow expansion for the Alderac Entertainment Group collectible card game 7th Sea will feature a special promo card: The Dread Pirate Carson (above — click on the mockup image I did to see the larger version of the painting).

This is the first collectible card art I’ve done since Steve Jackson Games’ Illuminati: New World Order five years ago. But it was a lot of fun, and it let me put my acrylics to use. Aaron Williams helped by turning the Dread Pirate Carson’s paper hat into one made from an old Dork Tower. Grin.

Not sure when or where the card will be available. Updates when I hear them. But I’ll try to make sure I have some at the cons this summer. 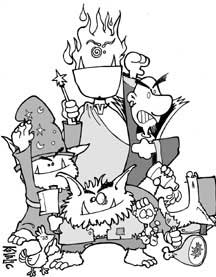 I also did a cover for the new edition of Kobolds Ate My Baby (left) for the cool, crazy guys at 9th Level Games. You’ll remember them from Warhamster (which appeared in Dork Tower 12), which they wrote for me as a favor. It’s a pleasure to return the favor for them.

And since I’m doing this as a favor to them, and not receiving a dime for this, I can plug it relentlessly and unbiasedly. Woot! Kobolds Ate My Baby is a fabulous, twisted beer-and-pretzels roleplaying game that I first discovered two years ago. Kill cows! Eat babies! Buy it! It rocks!

And now, some other updates:

* Voting for the Origins Awards is now closed. We won’t find out who won for a couple of weeks, at the Origins gaming convention, in Columbus, Ohio.

* People have been asking when Munchkin and Chez Dork will be released. Munchkin is slated for July, Chez Dork for August.