I’m still amazingly busy here. Lot’s of stuff going to press this week. DORK SHADOWS, The Collected Dork Tower Vol. II, for example. And The Best of Dork Tower #1, a 32-page comic packed with the very best strips from the first six issues of the comics. (Note: there is NO new material in this collection. It’s a way to introduce people to the comic book But it IS specially priced at $1.95) Then the EAGERLY awaited Dork Tower #14 heads off soon.

But there’s MORE! Look out for the next issue of Scrye Magazine, which features the Dork Tower characters on the cover! It’s issue # 8.5, with a cover date of July. Trust me: you won’t be able to miss it.

There’ll also be a five-page Dork Tower strip seen in COLOR for the first time in that issue! Check it out. I think it will be way cool (and you KNOW I’ll be framing that Scrye cover as soon as I get my hands on one). They’re on their way to stores now. 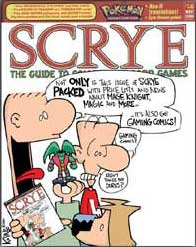 The issue of Scrye after THAT (8.6) will contain a FREE copy of The Best of Dork Tower in it! Huzzah!

That will put the circulation of The Best of Dork Tower at 75,000, making it possibly the greatest print run any gaming comic has ever reached!

In the meantime, I picked up a couple of new CDs the other day. All I can say is, if you have any interest in REM or ex-Husker Du man Grant Hart, pick up "Reveal" and "Good News for Modern Man" NOW!

By the way…HERE’s mixed-feeling city. I just discovered Dork Covenant is available from Amazon.com! Oh, well. Anyone wanna write a review for the site?

And the Hannover travelogue WILL be up here soon…honest!