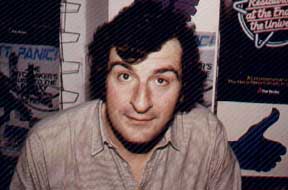 I met Douglas Adams once, in 1981. He was signing books and cassettes of The Hitch-Hiker’s Guide to the Galaxy at the Forbidden Planet, when it was just a small store on London’s Denmark Street. I was studying Astrophysics at Queen Mary College, University of London (a vital course for anyone wishing to seriously pursue a career in cartooning), so that Saturday I and several mates made the trip down the Central Line to meet him.

He seemed a completely affable fellow, decent and polite and just very, very happy to be in front of a huge line of fans such as myself. The line stretched around the block, but even though I was at least halfway down it, by the time I got to meet him, he seemed just as genuinely pleasant and personable as if I’d been first in line. 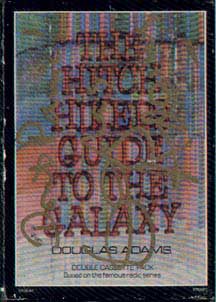 My pal Poz snapped the shot of him that’s on this page, and he signed a couple of books and the new audio recording (right) that I’d just bought.

To me, the definitive version of the Hitch-Hiker’s Guide to the Galaxy will always be the radio series. My friend Andrew Harding introduced it to us in high school (Millfield, Somerset), and it was a moment as pivotal for me as when I discovered Monty Python. For years, the .sig file on my e-mails was “This must be Thursday. I never could get the hang of Thursdays.”

As people know, Douglas Adams was only 49 when he died of a heart attack in Los Angeles this weekend. And while I’d love to say “So long, and thanks for all the fish,” somehow it doesn’t seem nearly enough.

Some people deserve to grow to a very ripe old age. Douglas Adams was one of them.

May he be sitting at the Restaurant at the end of the Universe, sipping a Pan-Galactic Gargle-Blaster.