DORK TOWER 13’s Blue Lines came in, and the comic itself should be back next week. HUZZAH!

MORE good news: even though it’s not in Madison, the POKETHULHU Roleplaying Game ($5.95) has shipped from the printer!

Last bit of grand news (for now, anyway), Steve Jackson Games just set a date for MUNCHKIN, a game I illustrated for them before I announced my retirement from Game Illustration! It’s a hilarious dungeon-dive. It’s set for a July release, and you can read all about it HERE.

(And while you’re at the Steve Jackson web site, check out the WAY WAY WAY cool POKETHULHU miniatures. They’ll be released in May.)

Lots more announcements coming up! But in the meantime, here’s a photo Aaron Williams took of me at the NEW AND IMPROVED (and dare we say Professional-looking) Dork Storm Booth at the GAMA Game Manufacturer’s Association Trade Show last month. 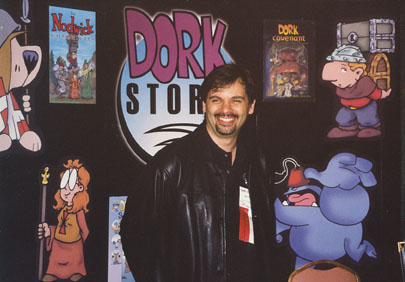