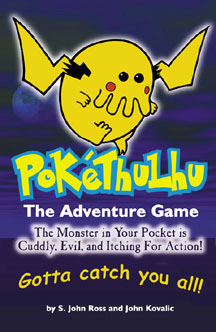 It’s an endless summer vacation in the land of the dead. The POKETHULHU- adorable eldritch monsters from the icy depths of space – run wild in the swamps, the forest, and even the cobwebs and sagging gambrel roofs of the fishing village that you call home.

POKETHULHU is a fantasy adventure game based on the popular cartoon show of thesame name. Ever wonder what happens when Jigglypolyp goes head to’pod with Dagong? Want to solve the mystery of why cute girls named Librarian Lumli work in every Cult Library – and why they always look the same? You’ve thrilled to the adventures of Randy Carter, Sonia, Titus and their friends, from Randy’s first Elder Badge to the threat of Thutwo in "Pokéthulhu: The Movie.”

But now, armed with your very own Shining Dodecahedron and Pokénomicon, you can quest for the Nameless City and do battle with the forces of Team Eibon! YOU become a Pokéthulhu Cultist, collecting and training a ‘thulhu of your very own!

Fast, furious and more fun than a screaming yellow electric rat in a blender,the stars are SO right for this hilarious game of cute, cuddly cultists and seizure-inducing evil!

(clickHERE to see a full-size version of the cover)